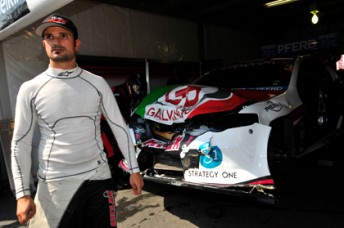 Tonio Liuzzi in front of his banged-up #3 Hiflex Ford

The #3 Team Hiflex Ford has been ruled out of the Armor All Gold Coast 600 after its start-line incident at Surfers Paradise today.

Further damage was sustained to the car when it was collected from behind (Simon Pagenaud) and the side (Ricky Taylor).

The single-car Ford team will begin repairing the car overnight and complete as much of it tomorrow before sending it back to the team’s workshop in Victoria ahead of its scheduled departure for Abu Dhabi next weekend.

Team driver D’Alberto was bitterly disappointed with the outcome of the incident.

“We made the shoot out and Tonio was quick, so once again, we’ve ticked all the boxes to get a result, but it hasn’t come,” D’Alberto said.

“The accident was no fault of Tonios. He did a great job all weekend and I feel sorry for him because it would have been great to be in a position to get him one of those surfboards to take home.

“Unfortunately, we’re out now, the car’s not going to be able to be fixed. It’s a massive shame, but we’ll just press on and get ready for the next one.”

Liuzzi says he had no chance to avoid the start line incident and feels they had a real chance at a podium result this weekend.

“I had a much better start than the cars around us. I went to the inside, they closed the door, so I tried to avoid and go right, but there was a Fujitsu car standing still. It was impossible to change line,” the Italian said.

“It was a shame. I was feeling strong for the week. Tony did a great job in qualifying. I’m confident that we could have fight for a podium.

“That’s motor racing, but unfortunately the car is heavily damaged and it has put us out for tomorrow.”

The #3 Team Hiflex car is one of two likely withdrawals for tomorrow, with the #33 Fujitsu Commodore in doubt.

CLICK HERE for Speedcafe.com’s earlier story on the GRM Commodore.