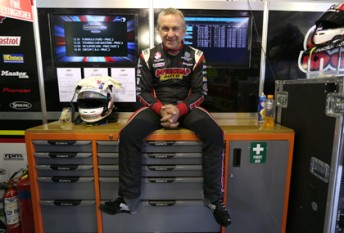 Russell Ingall looks set to be retained by Walkinshaw Racing for another V8 Supercars season in 2013.

Speedcafe.com understands that the 2005 V8 champion will remain with the Holden factory-backed team in what would likely be his swansong season.

His drive in the #66 entry at the famous Walkinshaw team will continue to be backed by his long-time supporter Supercheap Auto, which is currently in the first season of a multi-year deal with Walkinshaw Racing.

Ingall and Walkinshaw Racing managing director Steve Hallam were both not willing to make comment on the driving future of the category stalwart, while Holden Motorsport’s media manager Gerald McDornan would only add that an announcement will be made in due course.

“We won’t discuss any negotiations or contract until everything is finalised and we’re ready to announce our plans,” McDornan told Speedcafe.com.

Ingall has said in the past that he has no plans to retire at the end of the year and that his full-time future was in the hands of the team.

The two-time Bathurst 1000 winner has enjoyed a strong back half of the 2012 V8 season, including top 10 finishes at Sydney Motorsport Park and the Bathurst 1000 earlier this month where he finished ninth alongside Christian Klien. He currently sits 13th in the 2012 V8 Supercars Championship.

The 48-year-old has been one of most enduring drivers of his era and has collected an impressive list of achievements, while remaining immensely competitive. He won the 2005 championship, plus two Bathurst 1000s (1995 and 1997). He has also finished second in the V8 championship a record four times.