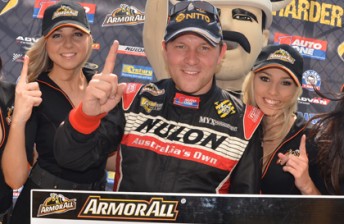 David Sieders has taken a lights-to-flag victory in Race 1 of the Auto One V8 Utes Series at Surfers Paradise.

The Ford driver and pole-sitter finished ahead of reigning champion Chris Pither and Cameron McConville.

Harris held down second place for the first half of the race until passed by Pither when he slipped on some oil. McConville wqs also able to find a way past Harris one lap later.

Nathan Pretty’s title charge took a hit after his Monster Energy Drink Holden suffered a differential failure. Currently third in the title chase, Pretty is also suffering from a virus this weekend.