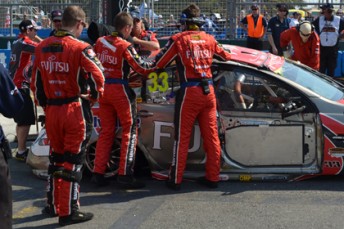 The GRM crew survey the damage on the #33 Commodore of Ritter/Taylor (PIC: Josh Evans)

The #33 Fujitsu Racing Commodore VE of Greg Ritter and American Ricky Taylor is unlikely to be fixed for tomorrow’s second race at the Armor All Gold Coast 600.

Taylor made a spectacular start to his V8 Supercars debut, rolling the #34 Commodore after a series of collisions on the front straight.

CLICK HERE for Speedcafe.com’s news story on the start chaos.

The #33 car has sustained heavy damage in all four corners of the car, and primary driver Ritter, who is filling in for the benched Alexandre Premat at Surfers Paradise this weekend, admits that the team is unlikely to fix the bent Commodore.

“I don’t think we are going to have enough spares to get it going,” Ritter told Speedcafe.com.

“The chassis is not too bad. The roof is an issue and the rear right corner where it hit the catch fence is damaged as well. There already talking that #33 needs to go onto a jig. If that catch fence was not there and there were many years of this race where there was no fence it would have launched into pit lane for sure.”

If the GRM crew is to repair the #33, it will have its work cut out for them as the #34 car of Michael Caruso/James Hinchliffe is also in need of major overnight repairs.

For Taylor, it was his first-ever standing start, and one that he is unlikely to forget in a hurry.

“It was my first time upside down, and I’ve never had as many cameras in front of my face. Unfortunately, it’s for all the wrong reasons,” said Taylor is a media scrum at the back of a busy Fujitsu Racing garage.

“The Fujitsu guys were awesome all weekend. I just feel really bad for it to end like this. As a guest driver, my job was to return the car to Greg in one piece, but it didn’t happen.

“I made a decent start, got by two or three guys, and then I pulled out, and the next thing I knew, there was someone stopped in front of me. I did my best to avoid them, but I couldn’t avoid them.

“I’d love to get back out there tomorrow, but the car is not looking good.”

Taylor admitted that he was not banking on racing the damaged car tomorrow.

“The guys are hard at work. They’ll keep going until (they find) something too bad, but at the moment, it’s not looking good,” he said.

Taylor backed the idea of standing starts, despite the fact that it took three attempts to start the race.

“I think standing starts are exciting. I’m not very experienced at it, but for the fans, it’s a good show. Maybe one either way might be a good balance.”