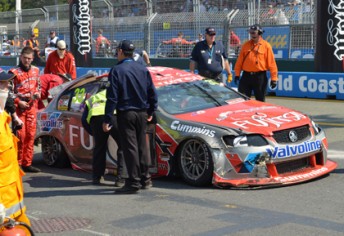 The remains of the #34 GRM Commodore

Two accidents have delayed the start to the Race 22 of the V8 Supercars Championship at the Armor All Gold Coast 600 today.

With all of the international drivers starting the race, the first attempted start saw James Hinchliffe (#34 Fujitsu) very slow off the start line, who was collected by Vitantonio Liuzzi (#3 Team Hiflex), who was then hit by Simon Pagenaud (#4 IRWIN Tools Racing).

The slowing trio then saw Ricky Taylor (#33 Fujitsu) try to break through an impossible gap, launching his Commodore into a roll on the front straight.

The accident saw all four cars mentioned above out of the race.

Taylor said that he feels sorry for the Garry Rogers Motorsport crew who has two cars to repair overnight.

“My job was to stay out of trouble and that’s not the way it went, I just feel terrible for the guys,” said Taylor.

“It’s hard to not look at yourself a little bit and put a bit of blame on yourself, but hopefully we can make up for it tomorrow.”

The restart was marred by more mayhem, with Nicolas Minassian (#14 Lockwood Racing) stalling his BJR Commodore, which was collected by Franck Montagny (#11 Fair Dinkum Sheds).

The third start went off with little drama.