Adelaide ANDRA event to go ahead today despite sabotage

Adelaide ANDRA event to go ahead today despite sabotage 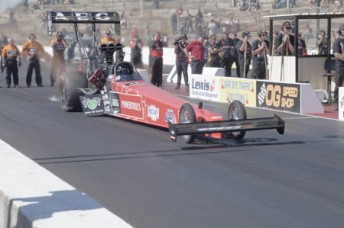 The opening round of the ANDRA Drag Racing Series for Top Fuel and Pro Stock will go ahead today at Adelaide International Raceway despite an attempted sabotage on the circuit during the week.

Diesel was poured on sections of the circuit, which uses the 1000 foot (303 metres) distance for professional drag racing.

ANDRA and Racing Onn Promotions – the promoter of today’s event – have worked tirelessly to ensure the second major drag racing meeting to return to Adelaide will go ahead from today.

“The event will go ahead, the track has been fixed and will be ready for the opening runs,” said Luke Nieuwhof – ANDRA’s media manager. “Somebody poured diesel on the circuit, but the promoters have worked around the clock to ensure the event will take place as planned. There’s absolutely no question about the race happening at all in Adelaide today.”

The event will see defending Australian Top Fuel Champion, Darren Morgan take on rival Phil Lamattina, who will be running two cars with Sydney-sider Luke Shepherd in his other Top Fuel rail. The highly competitive Australian Pro Stock Championship – arguably the closest motor racing Championship in the country – will begin its season again with a full field.