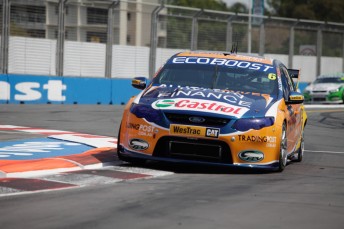 Will Davison has set the fastest time in Practice 1 at the Armor All Gold Coast 600 as the drivers had their first taste of the reconfigured kerbing around the Surfers Paradise circuit.

Davison set a best time of 1:12.07s before handing his car over to co-driver Mika Salo for the final flying lap of the 40 minute session.

Greg Ritter, who has replaced Alexandre Premat in the #33 Fujitsu Racing Holden this weekend, was 0.4s adrift in second after briefly moving to the top of the order with little over 10 minutes remaining.

As expected, the regular drivers completed the bulk of the running, although Salo, Will Power, Peter Dumbreck, Nicolas Minassian, Franck Montagny, Stephane Sarrazin and Jamie Campbell-Walter all ventured onto the circuit for exploratory laps in the closing stages.

Exploring the limits of the electronic sensors inside the re-profiled kerbs at Turn 2 and the Turn 7/8/9/10 chicane was a heavy focus for all teams. The majority of drivers had at least one of their times disallowed for jumping the kerbs, including Winterbottom, who reported that the sensitivity was “confusing” after having consecutive laps wiped mid-session. “We’re just trying to work out what we can use and what we can’t use,” said Winterbottom afterward. “Some sensors are more sensitive than others.”

Although narrowly beneath the fastest time set in Practice 1 last year, the beefed up chicanes ensured that Davison’s quickest time was a full two seconds slower than the race lap record he set in the closing stages of last year’s Sunday afternoon ‘free for all’.

Ironically, it was the cutting of the flat inside kerb at the final corner that raised the ire of Race Control in Practice 1, with Rick Kelly, James Moffat, Shane van Gisbergen, David Wall and Fabian Coulthard all receiving warnings for cutting the apex.

Two red flag periods for incidents in the Turn 1/2/3 chicane had punctuated the early part of the session.

Taz Douglas’ iSelect Commodore suffered substantial left-front damage when he clipped the Turn 2 apex kerb and fired into exit wall just 10 minutes in. The car returned to pitlane under its own power but took no further part in the session.

“It’s a pretty shit way to start the weekend. I just clipped the kerb in there and it just fired it into the fence,” said Douglas.

David Reynolds endured his own less dramatic version of the same incident just minutes after the restart, taking the left-side doors off his The Bottle-O Ford against the wall after his car snapped into oversteer at the exit of Turn 2.

It was also a difficult start to the weekend for Garth Tander, who was forced to sit on the sidelines for the majority of the session with engine problems. The #2 Holden Racing Team entry completed just one flying lap at the end of the running after Tander reporting a sticking throttle on his initial out-lap.

Things also went less than smoothly for Kelly Racing as the team suffered a brief mid-session ‘blackout’ in its garage. Kelly was one of several apparently frustrated with the kerb sensors, and also reported that “a European tried to stick me in the fence” at the end of the session.

Practice 2, for the international co-drivers only, will kick-off at 1135 local time.