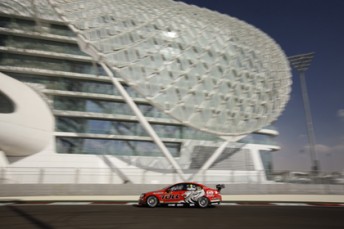 In one of the shortest formats seen in V8 Supercars in recent history, teams and drivers will hit the track for two 20 minute practice sessions on Friday (Nov 4), as well as a 20 minute qualifying session that will see the driver’s fastest three times count as the grid positions for each of the three races.

Two of the 12 lap races will be held on Saturday, while the final race will be run on Sunday.

Saturday’s first race will see teams use the hard tyre, while the final two races will be soft tyre affairs.

Each car will have 12 hard and 12 soft tyres to use over the course of the event and there will be no compulsory pit stops in any of the races.

V8 Supercars had initially hoped that the twin 200km race format it used when running as the main act at the Yas Marina circuit would be retained for its switch to the Formula 1 weekend.

The V8 Supercars are the only support category at the 2012 Abu Dhabi Formula 1 Grand Prix.