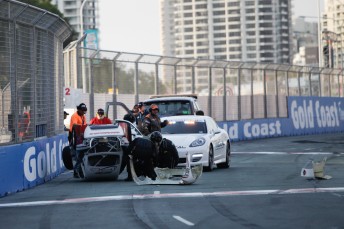 A huge rollover has highlighted the opening race of the FW1 Aussie Racing Cars Series at the Gold Coast street circuit.

John Reynolds rolled three times after losing causing of his car on the approach to Turn 1 at the start of the race.

Reynolds, the father of recent Bathurst 1000 runner-up David Reynolds, walked away from the incident.

At the front of the field, title contenders Trent Young and Kyle Clews wagged a fiercely fought war, with Young eventually taking the win over the pole-sitter by just over two seconds.

The FW1 Aussie Racing Cars Series returns to the Surfers streets tomorrow, with Race 2 at 1040.