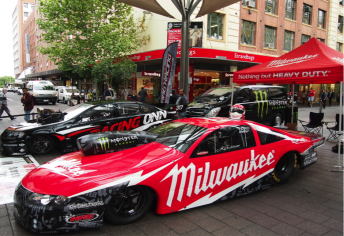 Rookie female ANDRA Drag Racing Pro Stock racer, Kirsten Tucker has received a massive boost ahead of this weekend’s season opener in Adelaide with the announcement she will carry the colours of Milwaukee Power Tools for the 2013 season.

Tucker – who’s brother, Shane won the Winternationals in the category in June in the Monster Energy machine – created history at that event by becoming the first female racer to enter the highly competitive Australian Pro Stock ranks.

“I’m ready for the challenge ahead and thankful for the support from my family, friends, fans and the team at Milwaukee Tools,” said Tucker at the launch in Adelaide.

“There is still a lot for me to learn, but I have a great team around me who will help me every step of the way.”