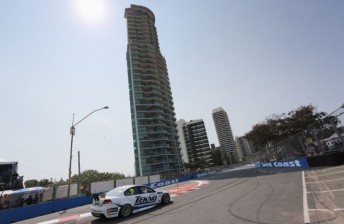 Marc Lieb has done it again, topping the second of the two international co-driver practice sessions at the Armor All Gold Coast 600.

The Tekno Autosports driver jumped from 14th to first by setting a 1:12.47s time on his final lap of the 40 minute session, crossing the line after the chequered flag fell.

Ryan Briscoe ended up 0.23s adrift in second having set two quick times inside the final six minutes, splitting his fast laps with a lock-up and subsequent off at the first chicane. 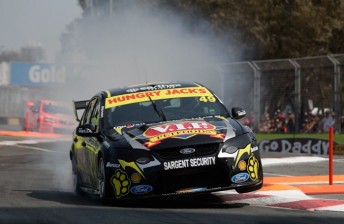 Boris Said damaged the VIP Ford at the back chicane

A single red flag period was required to retrieve the #18 Team Norton DJR Ford from the Turn 14 tyre barrier at the 12 minute mark after a mistake from GT ace Peter Kox.

Kox finished the session 27th in the order, three places behind team-mate Boris Said, who damaged the right-front corner of the VIP Petfoods Ford on the inner kerb at Turn 9 moments before the Dutchman’s issue.

Another to strike trouble was Tonio Liuzzi, who managed just seven laps before pulling the #3 Team Hiflex Ford into the garage with a tailshaft failure.

It was a low-key session for Bourdais, who completed just six laps in the opening 30 minutes of running, leaving the Frenchman 28th in the order. The reigning Dan Wheldon Trophy winner then jumped as high as second, before eventually ending up eighth.

Mike Conway meanwhile had his first laps in the Lucas Dumbrell Motorsport Holden after it missed Practice 2 following Taz Douglas’ crash in the opening session. The Briton set the 21st fastest time.

Max Papis was again the slowest of the co-drivers in the #17 DJR Ford, some 2.6s adrift of fast-man Lieb and 0.5s behind the 27th fastest Kox.

The fourth and final V8 Supercars practice session of the weekend will kick-off at 1535 local time.