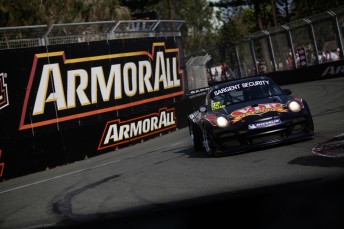 Quinn, the son of category owner Tony Quinn, set a time of 1:12.1115s, over half a second faster than the Ferrari 458 GT3 of Allan Simonsen/Nick O’Halloran.

The second row of the grid will be occupied by the Erebus Motorsport Mercedes Benz AMG SLS GTs of title leader Peter Hackett and German import Thomas Jaeger, but both were significantly slower than the speedy Quinn.

Quinn’s pole has closed the championship gap to just 11 points to Hackett.

He says that he is pleased with the speed and balance of his Porsche.

“That was good. We ran a few laps to dial both myself and the car in and then bolted on a new set of Michelin’s and went for it,” Quinn said.

“The speed came from using the bumps and kerbs to advantage while still trying to drive it as smooth as possible.”

The Australian GTs will return to the Surfers Paradise circuit for its 30 minute race at 1130 tomorrow before the second race on Sunday morning.