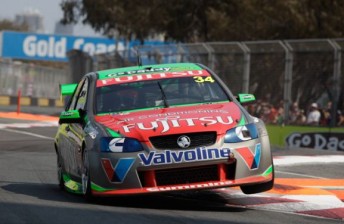 Michael Caruso in the car he will share with James Hinchcliffe

Michael Caruso has set the fastest time of the day to top the fourth and final practice session at the Armor All Gold Coast 600.

The Fujitsu Racing Holden driver spent the first half of the 40 minute session trading times with Mark Winterbottom, before setting a 1:11.69s lap with 16 minutes remaining that proved unbeatable.

Winterbottom came closest with his final effort, but saw a 0.2s advantage turn iinto a 0.1s deficit as the Orrcon Ford slipped on oil in the final sector.

Despite the track conditions, David Reynolds, Tony D’Alberto and Jamie Whincup also set their best times on their final laps to fill third through fifth.

With teams forced to return one of their nine new sets of soft tyres to V8 Supercars following the session, the final minutes were predictably filled with green tyre runs. The speed of the TeamVodafone Holdens was somewhat masked by a final corner mistake from Whincup on his new tyre run, and Lowndes being forced to abandon a late lap after being held up by Slade.

The final hit-out of the day featured a single red flag, called at the 15 minute mark to retrieve pieces of Garth Tander’s damaged HRT Commodore. Tander had locked a front-wheel into the first chicane before breaking his suspension on the high Turn 2 apex kerb.

Missing the remainder of the session ensured Tander completed just four hot laps for the day having earlier spent the bulk of Practice 1 in the pitlane with throttle problems.

Jonathon Webb also broke his suspension on the Turn 2 kerbing in Practice 4, forcing the former Development Series champion to abandon his Tekno Autosports Holden in the Turn 4 run-off area. It was a disappointing end to a promising day for the #19 Holden that had seen co-driver Marc Lieb top both the Practice 2 and 3 sessions.

The primary drivers completed the bulk of the laps in all cars following the two preceding co-driver only sessions, although several teams chose to send their internationals on a single out-lap before practicing a driver change.

The electronic sensors in the kerbs at Turns 2, 7, 8, 9 and 10 continued to be triggered on a regular basis, with Winterbottom among the high-profile contenders to abort promising laps after being deemed to have strayed from the track limits.

The V8 Supercars will return to the Surfers Paradise street circuit tomorrow morning for qualifying at 0935 local time before a Top 10 Shootout at 1050 and Race 22 of the championship at 1340.