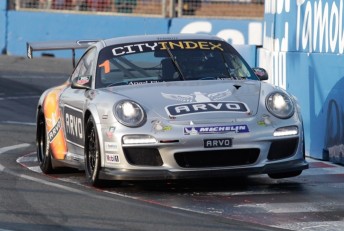 Porsche expert Craig Baird has taken pole position for Round 7 of the Porsche City Index Carrera Cup at Surfers Paradise.

Baird trailed Jonny Reid in the opening phase of the 20 minute session before Baird laid down his fast time on his final lap that could not be bettered.

“There are plenty of guys at the sharp end of the field and I really wanted pole position here. Having the championship lead, it’s the safest place to start from,” said Baird.

“We know we’ve got a good car, we’ve been pretty consistent over the past few rounds and I’ve now just got to stay out of trouble.”

Kiwi counterpart Reid will start from second place, overcoming the misfiring engine issues that affected the young gun at Bathurst two weeks ago. In the category’s one and only practice session this morning, Reid was the fastest.

Championship contender Alex Davison has scored the third fastest time, resplendent in new backing from from national law firm Rostron Carlyle Solicitors. The deal will remain on Davison’s car for the remaining rounds of the 2012 championship.

South Australian debutant Morgan Mutch will start from the tail of the 18 car field.