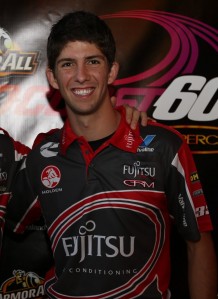 It was another left-field appointment of a driver who has a little less of a profile than some of the other former European F1 starts.

Taylor is the 21-year-old son of South African-born sportscar legend Wayne Taylor who has won the famed Daytona 24-hour race twice and competed at the Le Mans 24-hour race more than a dozen times.

Speedcafe.com collared Taylor, who lives in Orlando, Florida, for a chat about his career and his thoughts on climbing behind the wheel of a V8 Supercar for the first time.

SPEEDCAFE: Ricky welcome to Queensland and to the world of V8 Supercars. Tell us a little bit about your background?

Ricky Taylor: I’ve grown up in a racing family who were into sports car racing. I started in karting and then moved up through some of the open-wheel ranks like the Star Mazda Series and Skip Barber.

SPEEDCAFE: You then naturally moved into sports cars and made a big impression?

Taylor: Yeah in 2008 I hopped in my dad’s car in the Daytona 24-hour. It was intentionally I kind of got sucked into Grand-Am racing and I found a home in sports cars. I spent a year or two driving for various teams and then spent the last three years with my dad’s team, the SunTrust Daytona prototype team. So basically it’s been a sports car racing career.

SPEEDCAFE: You mentioned some of these open wheel experiences were you ever inclined to look toward moving into IndyCar?

Taylor: You know it was always the goal. My goal was to open-wheel racing as every young driver is. For me a big goal of mine was trying to make a living out of racing cars. That is a dream come true. I got into sports car racing and fell in love with it. Everything is going well so far.

SPEEDCAFE: Given your sports car background I take it Le Mans would be high on the list of priorities for you?

Taylor: Oh of course. I would love to do Le Mans. Hopefully one day I can go over there and get in that Corvette sometime. My dad has done it 13 times and he keeps telling me about it. I went over to spectate with Corvette this year for the first time and it was great. It was unreal, the atmosphere is incredible. It’s true what they said, there are so many English people there and so many Dane’s because of Tom Kristensen.

SPEEDCAFE: Tell us about your experience in these things. You did a lot of running in the morning session with the cool suit on in hot conditions?

Taylor: It is very different from anything I have driven before. It’s nice to be in a real powerful V8 beast really. It’s a lot of fun and the car rolls around a lot and I can definitely see why the racing is so exciting. We’ve got our racing over in the States and I can see why everybody is talking about your V8s.

SPEEDCAFE: There is a fine art to driving these things quickly with the locked rear diff and it is something driver’s from overseas struggle to come to grips with do you agree?

Taylor: Yeah I do. The way the diff is it changes your whole driving style. It’s been easier working with Greg Ritter my who has been helping me a lot. He knows both sides of it to come in and not to do the full season.

SPEEDCAFE: Driving a right-hooker for the first time, is the feeling still a little strange?

Taylor: It isn’t a problem but I still keep reaching up to the right of the dash for a gear change. I think once we get to the track at Surfers and we’ve got all the walls around it may be a different story but for now I feel pretty comfortable.

SPEEDCAFE: How much do you know about the Surfers track?

Taylor: I’ve been watching endless videos and all the data and some on-board footage. I feel like I know the track but on Friday it will probably be different.