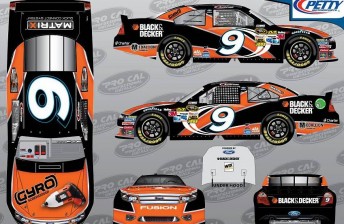 The tool company, which is a wholly owned subsidiary of Ambrose’ regular backer Stanley, will feature on the #9 Ford at Kansas on October 21, Martinsville on October 28, Phoenix on November 11 and Homestead-Miami on November 18.

The Australian’s car was one of 47 to taste the reconfigured Kansas track on Wednesday in the lead-up to the race weekend.

The 1.5 mile oval has been completely repaved since the category’s last visit, with variable banking added to the corners.

In addition to their regular Cup vehicles, Michael Waltrip Racing, Penske Racing, Earnhardt Ganassi Racing and Wood Brothers Racing all rolled out versions of their 2013 cars for the Kansas test, which continues today.