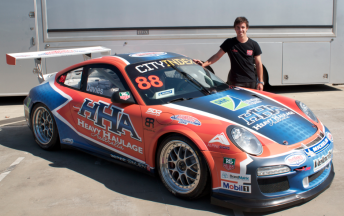 Having fully recovered from his huge Formula Ford accident in qualifying at Bathurst two weeks ago, Davies is delighted to have one of Queensland’s own companies support his Carrera Cup debut.

“We’ve been working on putting this together for some time and I am so pumped now that the car is wrapped and ready to go,” Davies said.

“I’m thankful for the support of Heavy Haulage Australia and want to repay their faith with a good, solid result this weekend, and then look further ahead to more Carrera Cup appearances.

“The cars are simply awesome to drive and I just love the Gold Coast street circuit. I know a lot of people call this their home race, but living just a couple of hundred metres from the northern end of the circuit makes this a genuine home race for me, and I can’t wait to get out there on-track.”