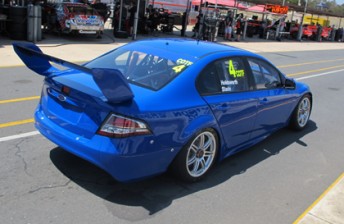 SBR’s COTF is having its maiden laps at Queensland Raceway

Running as a Ford Falcon FG, the car will complete 20 laps today as per the shakedown regulations.

Lee Holdsworth, who has previously sampled V8 Supercars’ own Ford Car of the Future prototype at both Queensland Raceway and Bathurst, has been given the task of driving the car this morning.

“The electronics system in the car is very different to what we’re used to, so we’re currently getting our heads around that. But that’s what this shakedown is for, so we’re happy with how it’s going.”

SBR will campaign Mercedes-Benz E63 AMGs in next year’s V8 Supercars Championship as part of a new partnership with Erebus Racing.

The first SBR Mercedes cars is not expected to hit the track until late January, leaving the team to complete its initial testing with its Ford engine and bodywork.