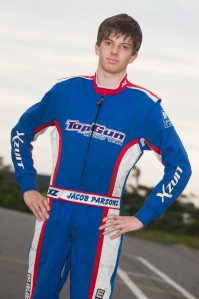 Australian kart racer Jake Parsons will line up at the Skip Barber Karting Scholarship Shootout at the Virginia International Raceway in America this week.

The three-day shootout, which began overnight Australian time, will see the winner receive a full season in the Skip Barber Racing School Mazda in either the 2012/2013 Winter or 2013 Summer Series. Other scholarships are also offered for the top five competitors.

The Shootout is limited to 50 karters. The first day of the Shootout is dedicated to road safety, with modules covering skid and slide recovery, emergency lane change maneuvers and classroom discussions on safe driving habits.

Days Two and three are on track, with multiple sessions each day in the fleet of equally prepared Formula Skip Barber race cars followed by detailed post-session debriefing by coaching staff. Media and sponsor relations training are also including during the event.

During the three days, karters are evaluated for not only their on-track speed and consistency but how they receive and apply feedback and perform off-track. Karters judged to have the greatest potential receive scholarships to Skip Barber Race Series events for the upcoming season.

Parsons, who is one of Australia’s two representatives in the CIK-FIA World Under 18 Karting Championship in 2012, completed a three-day Skip Barber Racing course at the Lime Rock circuit last month in preparation for this week’s shootout.

“I’m feeling pretty confident coming into the Shootout but having said that the competition is a bit of an unknown so I’m really not sure what to expect of them,” said Parsons, who is accompanied on the trip by his karting mentor Troy Hunt.

“My main focus is to learn as much as I can and get a base of where I’m at and the areas I can improve in. It would be great to get the scholarship but there is so much to learn from it that there will always be a big positive to take away from the trip.

“I’m really looking forward to getting behind the wheel and I’m sure it will be a great experience.”