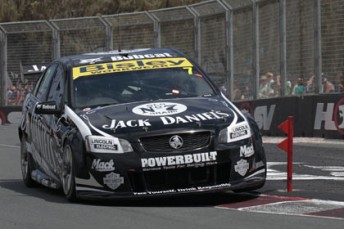 The size of the kerbs have been increased, and bollards moved and the electronic detection loops tweaked to help police the kerb hopping issues from last year

V8 Supercars has increased the size of the chicane kerbs – amongst other changes – to detract drivers from cutting kerbs at this weekend’s Armor All Gold Coast 600.

After a controversial end to last year’s race which saw the electronic detection loops disabled and the chicane bollards removed, V8 Supercars has sort a revised set of rules that include larger chicane kerbs.

In an email sent to all V8 teams today, drivers have been warned to keep all four wheels on the racing circuit, or suffer pit lane drive through or harsh points penalties. The bollards, meanwhile, will remain on the race track, but have been moved further in board from the apex. According to the V8 Supercars memo, the intention of the bollard is to “provide a line of sight on approach and not be used as an apex clipping point.”

During the two 300km races, a team can challenge a breach by immediately notifying Race Control via the LAN system (that connects the teams to the race officials). The officials will review the breach either during the race or, in some circumstances, after the race.

The total number of breaches for all cars will be reset to zero after the leader has completed two laps, 34 laps and 68 laps.

While teams have the ability to instantly appeal, harsh points penalties will apply if found that a breach did occurred. A minimum 50 points to be stripped from both drivers, regardless of the total number of breaches prior to the point of the challenged breach, and regardless of who was driving at the time of the breach.

During the race, penalties will be applied after the following;

– After four breaches, a warning will be issued on the LAN and via the short message on the timing screen (time permitting).

– After 5 breaches (one after the LAN warning) a bad sportsmanship flag will be displayed.

– After 6 (one after a Bad Sportsmanship flag), and any subsequent breaches, until such time a reset occurs, a black flag will be given, resulting in a pit lane penalty.

To receive a successful appeal after triggering a chicane loop, the teams will need to self police any advantage the car has received. V8 Supercars has explained that if a car trips a loop, it must not have gained a time advantage in respect to other cars. Teams will need to monitor sector times to adjudge if their car needs to ‘readdress’ track position.

Practice for the Armor All Gold Coast 600 starts on Friday, followed by qualifying and racing on both Saturday and Sunday.