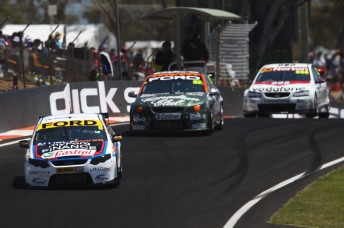 The 2013 V8 Supercars Championship calendar has been locked away, with 17 events to be held next year.

The season will start with an all-in, compulsory test at Sydney Motorsport Park. It will be the first time that all four manufacturers will be together on the race track, but it will be the only time the V8s race at the Eastern Creek circuit as the western Sydney track has missed out on an official round.

The Clipsal 500 kicks off the championship, with the Australian Grand Prix support races to be held two weeks later. It’s worth noting that if Network Ten secure the television broadcast rights next year, the Grand Prix is likely to become a championship event.

One major change is Bathurst’s date, which falls on October 13. The later date means there’s a four week gap between Sandown and ‘The Great Race,’ and while there’s still a two-week gap to the Gold Coast, there will only be one week between the Gold Coast and Abu Dhabi.

The later Gold Coast 600 slot means that the event does not clash with the final round of the IndyCar Series and the FIA World Endurance Championship’s round at Japan, opening up the possibility of drivers in those classes to compete at the international-flavoured Surfers Paradise street race.

V8 Supercars will announce the race formats and distances for next season soon, however, they did reveal that Queensland Raceway in July and the penultimate event at Phillip Island in November will be two day meetings.