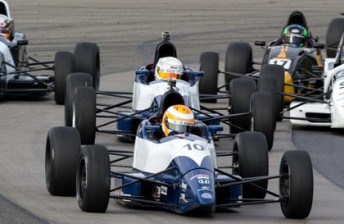 Spectrum has become the first-ever Australian circuit racing car constructor to win a championship in the United States after claiming the 2012 US Formula F 1600 Championship Series.

The Spectrum-Honda, prepared by Cape Motorsports with Wayne Taylor Racing and driven by Finland’s Matias Köykkä, wrapped up the title in the final round at Watkins Glen International with a win and a fourth place finish.

Spectrum’s 012H chassis is an all-Australian design constructed at Borland Racing Developments’ facility in Braeside, Victoria and is based on the 012 chassis used in the Australian Formula Ford Championship. The 012H is fitted with a 1600cc Honda engine and Hoosier slick racing tyres as per USF1600 series regulations.

At Watkins Glen for the final round, Köykkä was joined in the CMWTR line-up by American Neil Alberico after Davies pulled out of the final event due to his injuries from the qualifying at Mount Panorama.

After winning the first race, Köykkä adopted a calculated approach to finish fourth behind Alberico, collecting enough points to seal the title.

“It’s an amazing feeling to have come to the USA and won the USF1600 Championship Series,” the Finn said.

“All season we’ve had a fantastic car and the racing was very close and competitive at each circuit. The team truly deserve this, so I must thank Dominic and Nicholas Cape from Cape Motorsports with Wayne Taylor Racing for a wonderful year, and to Spectrum Racing Cars from Australia – our 012H was the class of the field all season.”