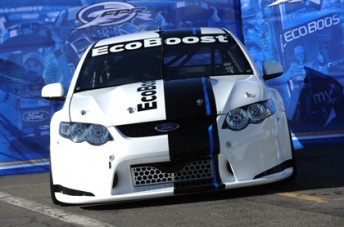 Ford Performance Racing says that its decision to conduct its second Car of the Future test between Bathurst and the Gold Coast events has been validated after a successful day at Sydney Motorsport Park.

While its rivals elected to skip the test in favour of other dates, FPR completed a full day with its first 2013-specification machine – the first team COTF test away outside of Winton and Queensland Raceway.

Factory Ford drivers Mark Winterbottom and Will Davison shared the day at the Eastern Creek-based circuit, with Davison driving the car in the morning. He says that car proved to be fast and reliable.

“It’s been fun to unleash it on a fast and flowing circuit compared to Winton and we’ve already gone quicker than when we were here for the race,” he said.

“We’ve undertaken some quick qualifying runs and some longer stints to get a read on tyre degradation and because we’ve had faultless reliability we’ve been able to achieve a lot.

“These tests are all about learning the car and how the rear end works with the new geometry and also re-learning how to make a car go fast given all the changes for next year.”

With each COTF ‘manufacturer’ allowed one test day away from their regular circuit, FPR’s engineering manager Mathew Nilsson believes that using the high-speed Sydney Motorsport Park facility has given the team a new insight into the capabilities of the next generation V8 Supercars.

“It was a good day working on our planned program as we continue to learn about the new car,” Nilsson said.

“We focussed on some of the bigger changes to try and narrow the set-up window.

“It was a good opportunity to test at a new circuit, particularly one with high-speed corners as there aren’t many of those at Winton. It was also a positive day to complete a significant number of laps without a single reliability issue which is a credit to everyone at FPR.”

FPR’s COTF will now form part of Ford’s Australian International Motor Show stand where it will be on display from October 19-28.