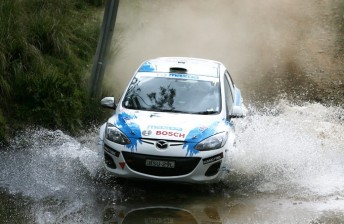 Simon Evans has delivered a victory for Mazda in the second heat in the 2WD competition of the Snake Racing Coffs Coast Rally.

Not since the days of the turbo-charged all-wheel-drive 323 of Murray Coote in the late 1980s has a Mazda scored such a significant result. It is a clear sign of the battle it will have with the likes of Honda when the Australian Rally Championship becomes a full 2WD championship in 2013.

Simon Evans enjoyed a fierce battle today with younger brother Eli (Honda Jazz) to win the heat by just 2.9 seconds, with the other Jazz of Mark Pedder in third.

Evans said he enjoyed having to work for the his first victory in the Mazda against younger brother Eli, who wrapped up the title with victory in yesterday’s opening heat.

“It’s really good to see him as a front runner in the Australian Rally Championship,” said Simon Evans.

“I’m really looking forward to battling with him again at Rally Victoria and throughout next year.

“He might have won this year, but he’ll always be the little brother!

“Mick Ryan and the Rallyschool.com.au team have provided me with a great car this weekend and it’s great to reward them with the a heat win in the car’s second event.”

Eli Evans claimed the round win after taking out yesterday’s heat and backing it up second in today’s heat.

Wauchope’s Michael Boaden in his Mitsubishi Evo IX conquered the slippery conditions to fulfil his dream of winning his home round after wrapping up the Bosch Four Wheel Drive ARC yesterday.

Boaden finished 1 min 4.7sec ahead of Matt Van Tuinen in the Subaru WRX STi after a tight, three way battle between Boaden, and John Mitchell.

Mitchell was challenging Boaden throughout the early part of the day and trailed by only 15.4 seconds but an issue on stage 12 saw him fall down the order to 11th by the end of the day.

“It was really slippery out there but great fun,” said Michael Boaden.

“The back end was out in throughout a lot of the stages so I’m glad I wasn’t facing them in a front wheel drive car. That would have been a bit interesting.

“I’ve always wanted to win my local event and to pick the championship up in the same weekend is just a dream come true. It doesn’t get any better than this.”