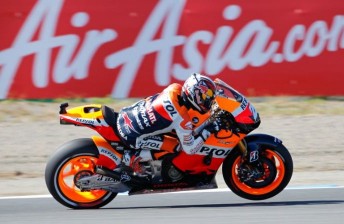 Pedrosa stalked the Yamaha rider during the opening stages of the race, eventually taking the lead with 13 laps to go and pulling away to win by 4.3s.

Crutchlow’s race would eventually retire from the race after running out of fuel on the final lap, elevating team-mate Andrea Dovizioso to fourth and Casey Stoner to fifth.

In his return race from the ankle injury sustained at Indianapolis in mid-August, Stoner ran as high as fourth early before losing ground as the laps unfolded.

Stefan Bradl and Valentino Rossi enjoyed quiet afternoons on the way to sixth and seventh respectively, while Nicky Hayden was one place further back in eighth.

It was another disappointing weekend for 2013 Ducati signing Ben Spies, who fell from his factory Yamaha on the second lap.