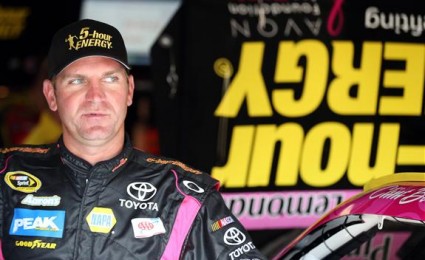 Clint Bowyer rolled the fuel dice to win the Bank Of America 500 at Charlotte and stoke up his claims in the Sprint Cup.

Bowyer managed to coax his Toyota into victory lane after 334 laps to beat Denny Hamlin and Jimmie Johnson in a tense finish where the top three gambled on stretching their fuel range to the finish.

The twists and turns of the Sprint Cup took a cruel turn for Brad Keselowski who finished 11th, a lap down on the leaders.

It means that his lead in the Chase has been slashed to just seven over Johnson with the small consolation that he collected the bonus point for leading the most laps.

Bowyer began the race 40 points behind but has closed up to 28 after the team scored their third win of the year.

Bowyer was being pressured by a closing Hamlin and then was relieved when he received the order to turn up the wick three laps to go.

Jimmie Johnson, who had a buffer of the chasers, was told to conserve his fuel inside the final 10 laps in what turned up to the a race where fuel mileage played an unexpected deciding factor.

Hamlin admitted the critical fuel situation meant that he had probably cost him a victory.

“It goes against anything we have ever learned as race car drivers. To go into fuel-save mode I knew what I had to do. I couldn’t get behind the 48 (Johnson) and 2 (Keselowski) but I’ll take second,” Hamlin said who is 15 points behind in the standings.

Johnson said it was a matter of being conservative and avoid the risk of running out of gas in the final laps.

“We are getting a lot better at this fuel mileage racing. It’s a tough thing to do and we are still not the best car out there but we will make it work week in week out and it’s part of the game right now for whatever reason.

The Chase remains wide open as NASCAR heads to Kansas next weekend for the Hollywood Casino 400.

See below for top 10 standings