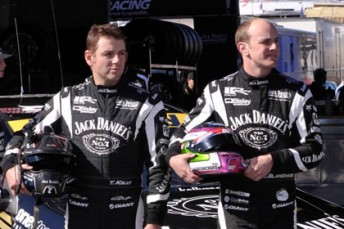 Todd Kelly, left, will be replaced by Tim Blanchard, right, in the final four V8 Supercars events this year

Tim Blanchard will replace Todd Kelly in the #7 Jack Daniel’s Racing Commodore while the owner/driver recovers from shoulder surgery.

Undertaken on Tuesday, Kelly’s surgery has been deemed a success, but his recovery has ruled him out of the remaining events of this year’s championship.

The first assignment for Blanchard will be at the international-flavoured Armor All Gold Coast 600, where the Victorian will team up with IndyCar driver Marco Andretti.

Blanchard drove with Kelly at Sandown and Bathurst, finishing 18th in both races.

The team has confirmed that Blanchard will also compete in the following Abu Dhabi and Winton races, although the car remains without a confirmed driver for the season finale in Sydney.

After spending the past three years in the Dunlop Series, the 25-year-old says he is over the moon to get his first ‘solo’ chance in the V8 Supercars Championship.

“I’m really looking forward to driving for Jack Daniel’s Racing once again and appreciate the opportunity that Todd and Rick have given me,” Blanchard said.

“I can’t wait to join Marco at Queensland Raceway for the test day and then share the driver’s seat with him at the Gold Coast.”

Blanchard’s promotion from co-driver is the second ‘main driver’ change for the Armor All Gold Coast 600. Yesterday, Garry Rogers Motorsport confirmed that Greg Ritter will substitute for the under-performing Alexandre Premat. CLICK HERE for Speedcafe.com’s story.

Post-operation, Kelly has already returned to the team’s Braeside, Victoria workshop, albeit on light duties. Kelly is in good spirits, despite feeling sore after the surgery.

“I’m a bit sore at the moment which is to be expected and pleased with the result of the surgery,” Kelly said.

“I can’t wait to get back behind the wheel once I get the green light from Dr. Barwood. Tim will take over the #7 Jack Daniel’s Racing car and I know he will do a great job for us and will help get Marco Andretti up to speed at the Gold Coast race.”