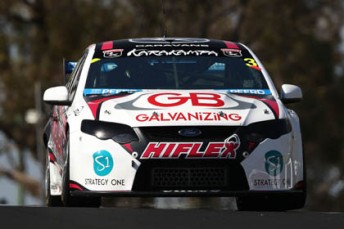 Single car V8 Supercars team Tony D’Alberto Racing is set to switch back to Holden for the 2013 championship.

After two years competing with Ford Performance Racing-built Falcons, the Victorian squad is preparing to return to the Walkinshaw Racing family next year for the start of the new Car of the Future regulations.

Speedcafe.com understands that the Hiflex-backed team will continue to campaign a single car out of its own race shop in Knox, Victoria, but will link with Walkinshaw Racing’s two-car Holden Racing Team, plus the Supercheap Auto Racing team, at the race tracks. The quartet will operate from pit lane together.

Team owner Al D’Alberto would not comment when approached by Speedcafe.com.

TDR set up its own V8 Supercars team in 2005, competing in the Development Series with a Walkinshaw-built Commodore. Tony D’Alberto went on to win the 2007 series before stepping up to the V8 Supercars Championship, racing a VE model Walkinshaw Holden under the Rod Nash Racing license. The family team secured its own Racing Entitlements Contract in 2010, before switching to FPR equipment in 2011.

D’Alberto has enjoyed a number of strong results in recent times, but was out of luck in last weekend’s Supercheap Auto Bathurst 1000.

Ironically, D’Alberto clashed with the Walkinshaw Racing Commodore of Russell Ingall at Forrest’s Elbow, breaking the suspension on D’Alberto’s Ford and ruling it out of the race while in a potential top 10 position.

D’Alberto will team up with former Formula 1 driver Vitantonio Liuzzi in the next event of the V8 Supercars Championship at the Armor All Gold Coast 600.