Jamie Whincup on the Bathurst 1000 podium

Bathurst 1000 legend Jamie Whincup is set to make his Race of Champions debut later this year.

The event will be held at the Rajamangala Stadium in Bangkok.

Whincup has been touted to compete in the Race of Champions in 2009, but the event was to be held in November that year – just as he was vying for the V8 Supercars title (which he won).

The 29-year-old will race in both the individual component of the event, as well as the Nations’ Cup. His Team Australia partner will be five-time MotoGP world champion Mick Doohan, a regular Race of Champions contender. 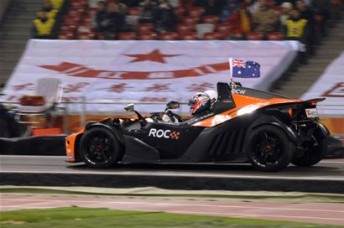 Mick Doohan at the Race of Champions last year

Whincup says he is keeping his expectations in check, given the high level of competition.

“Having watched all the greatest racing drivers compete and have so much fun driving world class cars on my television from down under, I couldn’t be any more excited about participating for my first time at the Race of Champions in Bangkok this December,” Whincup said.

“Being a ROC virgin I am not setting my expectations too high but I will have some fun and hope my big Aussie V8 experience helps me.”

Whincup and Doohan will compete against a strong line-up, including Michael Schumacher, Sebastian Vettel and IndyCar Series winner Ryan Hunter-Reay.