Biffle on pole with fastest ever lap of Charlotte

Biffle on pole with fastest ever lap of Charlotte 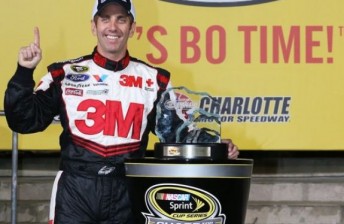 The Biff after scoring his 12th career pole, his third of the 2012 season

CLICK HERE for Speedcafe.com’s news story on Earnhardt’s decision to miss the Charlotte and Kansas races

Biffle currently sits ninth in the points standings with seven races to go, but says he’s not giving up on the possibility to winning his first crown.

“We’re certainly not gonna give up,” he said after qualifying.  “We’re gonna try to win here Saturday night, try to win next week all we can do is be in control of our own destiny and try to win these races.

“Is it too late for us to get back in the hunt?  Probably.  Mathematically, it doesn’t look good, but it’s possible.”