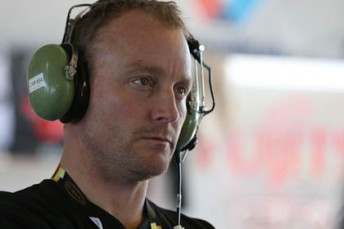 Greg Ritter will replace Alexandre Premat in the #33 Fujitsu Racing Commodore at the Armor All Gold Coast 600.

The long-time Garry Rogers Motorsport endurance race co-driver has been promoted into the #33 entry at the expense of the under-performing Frenchman.

In his first V8 Supercars season, Premat currently sits 26th in the championship.

At this stage, Ritter’s drive is a one-off, with Rogers stating that Premat will return for Abu Dhabi. It is the second time that he will drive a GRM Commodore at Surfers Paradise, having raced there with Lee Holdsworth in 2010.

Ritter says he is looking forward to returning to the street track – marking the first time that he has raced on Dunlop’s soft tyre compound.

“It has come out of the blue. I only got the call yesterday, so it was pleasant surprise,” Ritter told Speedcafe.com.

“It’s the first time that I’ll be on the soft tyres. I’ve heard you’ve had to go easy on them to make them last, which might work on in my favour, but I guess we’ll find out in a week’s time.

“I’ve seen a bit of Ricky racing in the American Le Mans Series. That form of racing might help him out compared to the IndyCar guys. Those style of cars are closer to a touring car, so I think that will be handy for him.”