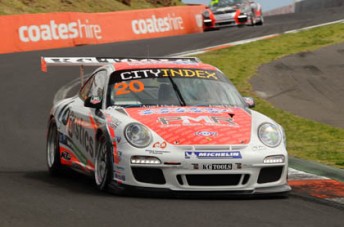 South Australian Morgan Mutch will make his Porsche City Index Carrera Cup debut in the next round at Surfers Paradise, supporting the Armor All Gold Coast 600.

The state-based Formula Vee regular will drive for Team BRM in a 911 GT3, supported by Auserve Commercial.

Team BRM manager Mark Rundle says that Mutch will have to ease up to the task of switching from his usual Formula Vee ride to the powerful Porsche.

“It is going to be a tough challenge for him, but he did a test day in the car recently and he equipped himself quite well by the end of the day,” Rundle told Speedcafe.com.

“He’s also testing this Saturday, so he would have done a few laps by the time we get to first practice on the Gold Coast.

“Morgan is very open to listening and learning. It will be a good eye opening experience for him, but because he’s willing to listen and learn, he’ll be more likely to pick it up quickly.”

Mutch could be one of three new Carrera Cup drivers on the Gold Coast, with two ‘TBA’ drivers listed on the current entry list.

See below for Carrera Cup’s round review from Mount Panorama.