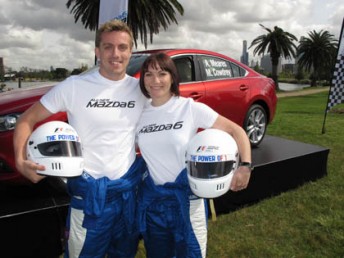 Two of Australia’s Olympic heroes have been confirmed as the first competitors in next year’s Australian Grand Prix Celebrity Challenge.

Gold medal stars Anna Meares (cycling) and Matthew Cowdrey (paralympic swimmer) will drive the all-new Mazda 6 diesel amongst 18 other celebrities from a wide variety of backgrounds and disciplines.

The event will mark the first time that a clean diesel engine has been used in the prestigious event.

The celebrity race will be held over five laps on Sunday.

Meares said that competing at Albert Park’s road course will be a dream come true.

“Much like cycling, it is such a technical and mentally draining sport and I have the greatest respect for Formula 1 drivers.

“It’s also not very often that I get the chance to race againt Sir Chris for bragging rights!”

“It’s a great honour to take part in a race like this,” said Cowdrey.

“I’m a very competitive swimmer, and don’t like losing, so expect nothing less when I’m out there on the circuit.”

See below for Speedcafe.com’s news video.