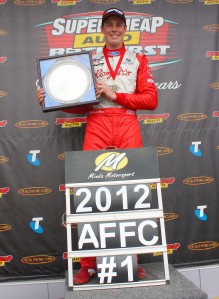 Jack Le Brocq is set to make his V8 Supercars debut in the final round of this year’s Dunlop Series at Sydney Olympic Park.

The recently-crowned Australian Formula Ford champion is pencilled in to drive the Minda Motorsports Commodore VE, driven for the first five rounds of the season by Elliot Barbour.

After last weekend’s Bathurst round, Barbour has elected to sit out the rest of the series to focus on securing budget for 2013.

The entry will be driven by Supercar Showdown runner-up Glen Wood in the penultimate round at Winton next month.

Before Le Brocq makes his Sydney drive official, he is waiting for a backer to fully commit to the cause, but he is hoping to use the Homebush street event as a launchpad into a full Dunlop Series assault in 2013.

“We looked at going overseas at the start of this year, but it is very expensive, so our plan is to find budget here in Australia and we’re going to try and do V8 Supercars,” Le Brocq told Speedcafe.com.

“I hope it does happen. We only have a verbal commitment at the moment (to fund the Sydney drive), there’s nothing signed, but hopefully we can get it over the line.

“We want to get some experience in these cars, and with Clipsal being the first round of the championship, it will definitely help for next year.

“I certainly have no expectations if we do it. I’ll just want to keep it off the wall and learn how the category works.”

If Le Brocq does get to fulfil his Sydney V8 debut, it won’t be the first time he has driven a V8 Supercar. He first steered a Car of the Future prototype during V8’s aero testing earlier this year. Also, the Victorian drove demonstration laps aboard the 1998 Holden Racing Team Bathurst Commodore last weekend.

Le Brocq wrapped up the 2012 Formula Ford Championship at Bathurst last weekend, joining the likes of Craig Lowndes, Garth Tander, Jamie Whincup and Will Davison as national champions of the feeder class.

“To be on the list with half of the guys from the V8 Supercars pit lane, there’s a lot of good guys there, so it’s great to be on there and follow their footsteps,” Le Brocq said.

“To wrap up the title at Bathurst is a pretty cool feeling too. I can’t really ask for anymore. We’re all pretty happy with that.”

The final round of the Australian Formula Ford Championship will be held at Winton Motor Raceway on November 16-18.