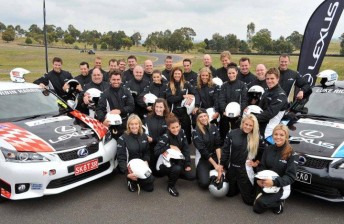 The 2011 cast of celebrities that raced at Albert Park

The popular Celebrity Challenge will return to the Australian Grand Prix support card next year.

The Grand Prix Corporation will confirm at the Albert Park Pits tomorrow that the new Mazda 6 Diesel will be the car that 20 Australian and international stars will race around the Melbourne street course next March.

According to a media alert distributed today, the Celebrity Challenge will feature a “soon-to-be-released family car,” marking the first time that a clean diesel engine has been used in the event.

The Mazda 6 was revealed to the public at the Moscow Motor Show in late August and will hit Australian roads in early 2013.

Two of the celebrities that will compete in the event will be revealed at the media event tomorrow morning.

The last time that the Celebrity Challenge was held at the Grand Prix was in 2011 aboard Lexus’s CT 200h luxury sports hybrid hatches, pictured.

The Formula 1 Australian Grand Prix will be held on March 14-17.