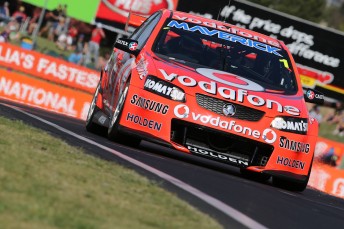 Jamie Whincup has taken his fourth victory in the Supercheap Auto Bathurst 1000 by holding out a gallant David Reynolds in a fuel saving battle to the chequered flag.

The duo were separated by just 0.3s after an intense final stint that ended with Whincup handing co-driver Paul Dumbrell his first Mountain triumph.

The result marks the first podium finishes in V8 Supercars for both Reynolds and his co-driver Dean Canto.

Craig Lowndes fought through the top 10 on the run home to take third in the car he shared with Warren Luff, while the James Courtney/Cameron McConville and Michael Caruso/Greg Ritter Holdens completed the top five. 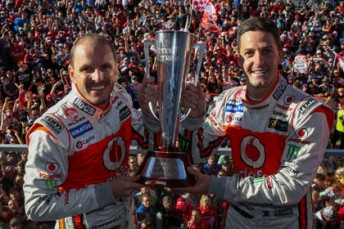 Paul Dumbrell and Jamie Whincup with the Peter Brock Trophy

The race was heavily impacted by tyre problems for the leading runners that began to strike less than 20 laps in.

While the two TeamVodafone cars were among those forced to make unscheduled pitstops due to ruined tyres within the first two stints of the race, both cars regained the lost track positon with a mixture of speed, strategy and the misfortune of others.

Ford Performance Racing’s two lead entries also suffered from the dramas, with the Winterbottom/Richards car surviving to run fifth before a tyre problem on Lap 129 forced the Orrcon Steel entry into making an additional stop. The pair eventually finished 11th.

The pole-sitting sister car of Will Davison/John McIntyre fared even worse. Their torrid day included two stints severely cut short by tyre problems, a drive-through for a pitlane infringement, a spin after contact at The Cutting and an eventual suspension failure through The Chase. The car was eventually repaired and finished 24th.

One place further down the oder were last year’s winners Garth Tander and Nick Percat after the latter crashed across the top of the Mountain in his first stint.

The two cars caused the final three Safety Cars of the race – the last of which was called on Lap 113 of 161 and set up a long two-stint fuel battle to the end.

Reynolds briefly fell behind Courtney in the closing stages until fading tyres on the factory Holden saw The Bottle-O Falcon drivers reverse the positions.

Whincup was being told to save fuel by his team as many as three times per lap during the final laps before holding on to take his first Bathurst win as a ‘lead’ driver.

The early tyre problem for the Lowndes/Luff pair put the Sandown winners behind their team-mates. That resulted in a repeat of the 2011 Bathurst race as car #888 lost time on multiple occasions while forced to queue in yellow-flag induced pitstops.

The situation saw Lowndes rejoin from his final stop in a net sixth position before eventually overhauling the ailing Courtney with just two laps to go.

Engineers spent much of the going warning their drivers to stay off key kerbs and run particularly cautiously while pressures were down following Safety Car periods and pitstops, but the caution taken often only prolonged the inevitable.

The Safety Car appeared six times through the race. The full course yellows were called on Lap 20 when the Michael Patrizi/Jonny Reid Holden stopped at the exit of The Cutting with a driveline failure, and subsequently returned on Lap 39 for debris, Lap 54 for a crash from Steve Owen (caused by brake problems following a pad change), Lap 92 for a stranded David Besnard (who spun at McPhillamy after suffering steering issues), Lap 105 for Andrew Jones (who went off at Murray’s Corner) then Lap 113 for Besnard (who also went off at Murray’s).

See below for the updated championship standings after 21 races