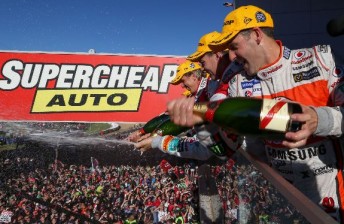 Whincup celebrates on the podium

Jamie Whincup says that pre-race criticism of his mental toughness from category legend Dick Johnson inspired him to hold on for victory in today’s Bathurst nail-bitter.

Whincup defeated a determined David Reynolds after a tense final stint that saw the TeamVodafone driver forced to juggle dwindling fuel and tyre reserves while holding out his Ford rival.

CLICK HERE for Speedcafe.com’s timeline of how the race unfolded

The now four-time Bathurst winner revealed post-race that remarks from Johnson claiming that he is “mentally weaker than (Craig) Lowndes” and would be unable to beat his team-mate this weekend struck a chord.

“The thought that came into my head with 10 laps to go was Dick’s comments during the week that I didn’t have the mental capacity to win the race,” said Whincup, whose fourth win adds to the three won alongside Lowndes between 2006 and 2008.

“I thought of that and it definitely helped me in the last 10 laps for sure.”

Adding to the 29-year-old’s clear pleasure, he and co-driver Paul Dumbrell had to fight back from early adversity to take the win.

Whincup admitted however that he had begun to doubt whether victory would be possible during the problems.

“I thought here we go again to be honest,” said Whincup, referring to last year’s race where his car led the most laps before grinding to a halt with an alternator failure.

“With the window popping out on Lap 2 I thought this could be a tough day and 15 laps later we had a tyre ‘blow out’.

“The race actually worked to our favour after that. That tyre failure didn’t really affect us too much towards the end (with the way the Safety Cars fell).

“It’s such a massive team effort and we didn’t have a weakest link today. There was no one member in the team that let us down in any way.

“That was definitely the key. Every single person did their job and raised their game for the big day. At the end of the day that’s what got us the win.”

Whincup also said that the victory was extra special given the “50th year” celebrations taking place during the week.

“This could be up there with the highlight of my career, without doubt,” he said.

“I massively enjoyed my previous Bathurst wins and my championships, but this has been a massive event.

“To stand on the top step of the podium in the 50th year is unbelievably special.”