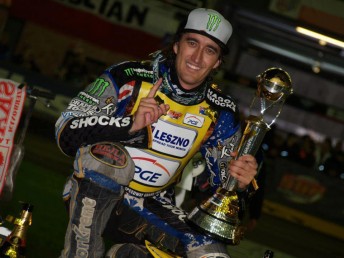 Although he suffered an engine failure in the final, Holder wasn’t reliant on the decider to be awarded the F.I.M. Gold Medal. In controversial circumstances, Holder and fellow Championship aspirant, Nicki Pedersen came together in the semi-final. Both were allowed back into the race, but not before the emotion nearly boiled over on track and between the crew in the pits.

Outgoing Australian star, Jason Crump showed pure class in guiding Holder through the situation, whilst Crump was out of action, Holder made his way into the final as the World Champion elect.

Crump’s World Championship swansong didn’t go to plan, scoring just five points in the event. There could have been no better handing over of the baton from Crump to Holder than the youngster winning the World Championship.

2011 World Champion, Greg Hancock had the chance to eclipse Pedersen in a run-off for second if he won the final, but unfortunately for one of the nicest guys in the World Championship, he finished third – but was gracious in seeing his Swedish club team-mate Holder take over his mantle.

Holder kicked off the meeting with a first race win in heat four. From there, it never appeared as though the night would have any different outcome to what it had, particularly when he defeated the prickly Dane in their heat 13 clash. Overall, the Australian – who celebrated his 25th birthday just last week – walked away from the event with 15 points. He is World Champion by a mere eight points.

The World Championship is an exclamation mark on a meteoric rise to stardom for the South-Western Sydney racer. Amazingly, 2012 is just his third season in the Grand Prix and his international career – which started with the Isle of Wight in the British Premier League – is still very much growing.

The four time Australian Champion is the club captain at the Poole Pirates in the UK – who have held his contract since the beginning, rides for Piraterna in Sweden and for the Unibax Torun team in the Polish League.

The entire Holder family have and continue to dedicate their lives to the sport and Chris’ result will ensure a long celebration by the extremely passionate clan.

Holder is well known as having an easy-going attitude and being a boy that just likes riding his bike. Just riding has bike for the Appin born racer has now seen him receive the highest prize of all. World Champion.