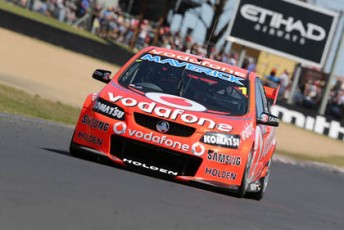 The scene is set for the final 40 laps of the 2012 Supercheap Auto Bathurst 1000 with three quarters of The Great Race now complete.

With all cars in the top 10 on the same fuel strategy, the race to the flag is now in full swing.

The third quarter of the race has seen three Safety Car periods – all caused by Brad Jones Racing entries.

Fabian Coulthard’s race was run when an issue saw David Besnard leave the circuit at McPhillamy Park and become stranded in the sand trap.

The next Safety Car was brought out by the second BJR car of Jason Bright/Andrew Jones when it slipped off the road at Murray’s Corner.

Besnard came off the circuit again soon after, also at Murray’s.

Championship contender Will Davison has seen his chances spin away when his team-mate John McIntyre was involved in a clash at The Cutting with SP Tools driver Luke Youlden. Car #6 spun in the incident and now sits outside the top 20 with Davison at the wheel.

See below for Speedcafe.com’s live tweets of the first half of the 1000km race from Mount Panorama.

CLICK HERE for live tweets of the race from Speedcafe.com.

– Winterbottom now says he has a tyre vibration #V8SC

– Dumbrell, Winterbottom, Bright, Murphy, D’Alberto and Klien have in fact all pitted this lap. #V8SC

– Van Gisbergen only “one or two laps away” from next stop. “Concentrate and be smooth,” he’s told #V8SC

– Lap 91 Holdsworth in this lap for a driver change. #V8SC

– Lap 92 Besnard is off at McPhillamy. Car is facing backwards on grass at exit #V8SC

– “Something broke, the steering just went heavy and we were bloody lucky to keep it off the fence,” says Besnard. SAFETY CAR #V8SC

– “I don’t think it was a puncture, it may have been, but I think something else broke,” concludes Besnard #V8SC

– Those to pit under this Safety Car have included the formerly second placed Canto, fourth placed Luff and seventh placed Holdsworth #V8SC

– The Besnard car is now back in pitlane. “The steering is bloody heavy,” he says before heading back into the fray #V8SC

– Safety Car lights are out. Race will restart on Lap 95 #V8SC

– McIntyre has spun at The Cutting on the restart lap and is facing the wrong way. He eventually rejoins 23rd #V8SC

– McIntyre will pit as he is worried about the tyres. Driver change #V8SC

– FPR had told McIntyre. “It’s your call, pit if you think it’s unsafe to continue”. The car sits 22nd before the stop #V8SC

– Lap 105 Dumbrell has been punching out 2:10s since the restart and holds a 5.5s lead over McConville #V8SC

– “Something is bent in the left rear. It doesn’t feel right,” says Davison #V8SC

– SAFETY CAR deployed for the fifth time. “I braked early into this last one (corner) and it just wouldn’t stop,” says Jones. #V8SC

– The top 19 all pit. Whincup escapes narrowly ahead of Reynolds. The #52 had fuel in hand but was delayed on its exit #V8SC

– W.Davison meanwhile benefited from that as he was almost a lap down when the yellows flew #V8SC

– Strategies have been reset at the front with only one more stop required for fuel. Tyres are the question mark though of course #V8SC

– Craig Lowndes’ pitlane release is being investigated. He emerged side-by-side with Wall #V8SC

– “It’s just got ridiculous oversteer. I can’t even turn the steering wheel and the back is coming around,” says W.Davison in 20th #V8SC

– Lap 112 Ingall pits from fourth. Bright is also back in as the trouble for #8 continues #V8SC