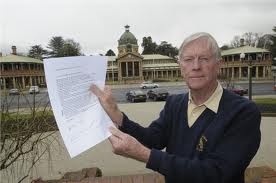 MacIntosh died after a short illness in Bathurst recently at the age of 79.

While MacIntosh was not essentially a motor racing fan he had the vision and nous to give V8 Supercars a break during the short battle for Bathurst during the Super Touring era in 1997 and 1998.

“Ian was the mayor who broke from the consortium and he said look ‘are you fair dinkum that you will run your own Bathurst”? And I said, ‘yeah we will’,” Cochrane told Speedcafe.com

“He approached me about doing that and we struck up a great friendship straight away.

“I promised him what we would do that and we delivered. Over the following three years after 1997, the Bathurst City Council who were initially very hostile of Ian’s decision saw that Ian backed the right horse.”

“We are very thankful that Ian made the call that he made.”

“It was a bold thing for Ian to do at the time because he alienated a lot of his own people. It was an enormous call.”

MacIntosh was well connected in the political halls of New South Wales and in Canberra and would use this to help Cochrane rebuild the pit facilities at Bathurst.

“After my famous quote that Bathurst was a third world country are we had all the rain in 2000 Ian and I worked very hard with the NSW and Federal Government to get the funding to rebuild Bathurst.”

“What you see today is a huge result of the work of Ian MacIntosh. Bathurst was very lucky to get Ian who was at the Boeing corporation. But he decided to retire to Bathurst and Boeing’s loss was Bathurst’s great gain.

“I used to joke to him that it was great flying with you Ian.”

Cochrane had acknowledged MacIntosh in his letter to his close contacts and friends informing them that he was to stand down as V8 Supercar executive chairman which the former major received shortly before he died.

“He was a terrific bloke and was very calm and thoughtful and a complete gentleman.”