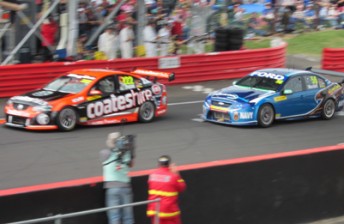 Nick Percat has held out a determined Chaz Mostert to secure a double-victory in Round 5 of the Dunlop Series at Bathurst.

The Coates Hire Holden driver repeated his Friday effort by leading every lap, but this time faced a race-long challenge from fellow front-row starter Mostert.

Mostert appeared to have the pace for the majority of the distance, with Percat receiving a bad sportsmanship flag mid-race for over-aggressively defending his position.

Percat looked to have the race won, however, when Mostert touched the wall on the run to McPhillamy Park and fell more than a second adrift with three laps remaining.

The Ford Performance Racing driver then fought back, running side-by-side with Percat into The Chase on the final lap before missing out on victory by just 0.13s.

Scott Pye finished third having briefly passing Mostert in the early stages with a dive-bomb move at Hell Corner. The manouvre occurred immediately after the Ford driver had enjoyed his own quick exchange of positions with Percat at The Chase and Murray’s Corner.

Despite McLaughlin’s charge from 13th on the grid, the results see Mostert retake the points lead with two rounds remaining.

The 14 lap race featured a single Safety Car period towards its halfway mark after a crash from Aaron McGIll at the exit of McPhillamy.

Aaren Russell also came a cropper, crashing at The Cutting on the final lap.

Mostert now holds a 20 point lead over McLaughlin after five of seven rounds with Percat 104 points further adrift in third.