Luff the quickest co-driver in Practice 2 at Bathurst

Luff the quickest co-driver in Practice 2 at Bathurst 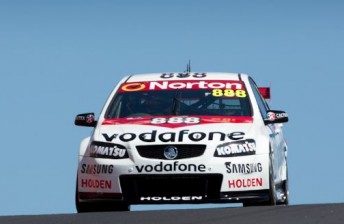 Warren Luff has backed up his recent Sandown 500 victory alongside Craig Lowndes by emerging fastest from the co-driver only Practice 2 at the Supercheap Auto Bathurst 1000.

Luff recorded his best lap of 2:09.18s as the chequered flag fell on the session, eclipsing an equally late effort from Andrew Jones by 0.23s.

Steven Richards and Paul Dumbrell ended the running third and fourth respectively, having both spent time at the top of the sheets.

Chris Pither was an early casualty, running the #21 Wilson Security Holden into the tyre wall at Griffins Bend. The incident brought a red flag period that lasted 13 minutes.

Dumbrell quickly moved to the top of the order on the restart, holding his position as the only man in the 2:09s until the final 10 minutes.

At the other end of the order, Shannons Supercar Showdown competition winner Jesse Dixon steadily improved throughout his 17 laps to end up 28th on 2:14.22s.

Reigning champion Nick Percat was just 22nd fastest in the #2 Holden Racing Team Holden, a full 1.3s adrift of team-mate James Courtney. The factory Holden team is one of several to have complained of tyre issues during the day so far as each squad tests the set-up limits of the rubber.

The third and final practice session of the day for the V8 Supercars will get underway at 1505 local time.