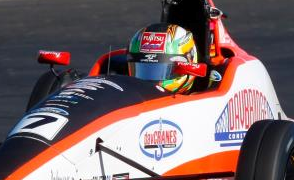 Garry Jacobson and Shae Davies have shared the fastest times in the two practice sessions for the Australian Formula Ford Championship at Mount Panorama today.

In Practice 1, it was Garry Jacobson that topped the session with a 2:18.6721s lap time ahead of Shae Davies and Jack Le Brocq.

The Sonic Motor Racing Services driver is still a mathematical chance of claiming the Championship, with this weekend’s penultimate round set to be crucial.

“The car was good straight out of the box, it’s pleasing that we’ve carried on our form from Sandown,” said Jacobson.

“To get the quickest middle sector over the top of the Mountain is really important to me.

“The challenge tomorrow is to put myself in a position where I can take full advantage of the draft down the straights. Getting a tow at Bathurst is even more important than tracks like Phillip Island and Sandown; it’s going to be crucial come the end of the race.”

In Practice 2, Queenslander Shae Davies hit back when he managed to edge out Mathew Hart by 0.0459s.

“Bathurst is an awesome track, getting a good lap time together is pretty tough, but I’m loving the challenge,” Said Davies.

“My favourite part is the run from Skyline down to Forrest’s Elbow. There are walls on both sides, and these Formula Fords change directions very quickly. It’s a lot of fun.”

Davies fastest time of 2:18.7580s did not eclipse Jacobson’s fastest effort in Practice 1 but made good progress today and will be hoping to turn heads in front of what looks to be a bumper crowd across the weekend.

Championship points leader Jack Le Brocq was third fastest in both sessions, in what is his first experience racing at Mt Panorama.

The AFFC is making its return to the Bathurst 1000 support card after a 16-year hiatus from the event.

Formula Ford is on track tomorrow at 1025 AEST for qualifying before the first of three races at 1745 in the afternoon.