Cochrane departure to come within weeks

Cochrane departure to come within weeks 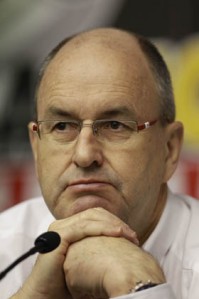 Tony Cochrane has hinted that he is likely to walk away from the sport before the end of the month.

Two weeks after Cochrane announced that he will step down as the executive chairman of V8 Supercars after taking control of the sport 16 years ago, he has put a time frame on when he will depart the Gold Coast-based headquarters of the sport’s administrators.

It was stated in Cochrane’s shock announcement that he would depart as soon as a replacement was found.

A likely time to bow out would be after the Armor All Gold Coast 600 two weeks after Bathurst which is an event Cochrane has played a key role in after the downfall of American Indy/Champ Cars.

“I will be stepping out of my chairman’s role I would think sometime this month,” Cochrane said in response to a question from Speedcafe.com.

“Then I’ve agreed to go on the board for one or two years in an advisory capacity,” he said.

“I’m looking forward to that and keeping my finger a little bit in the pie. But I think it’s time for a change.

“The sport is a whole lot bigger than any one individual.

“So the sport will continue on and prosper and it will grow into a fantastic sport as it has done for the last 15 or 16 years with me at the helm.”

The question of the timing of Cochrane’s exit has been the subject of much talk considering a fresh media rights deal is not yet within site.

One of Cochrane’s strengths was that he had a penchant for being a master dealmaker however the times of pulling off miracle contracts may have run their course.

He has defended the timing of his departure, citing that it came two days after news broke that AMG would enter the sport in an alliance with Erebus and Stone Brothers.

“It was a bit like when I came into the sport, nobody knew about it. I kept my counsel because I was trying to work out what was the best time in terms of the sport.”

“I thought really with AMG joining and the deal with the Stone Brothers and Erebus I thought that was a great time to go out on.”

Cochrane also dismissed that a better time would be when the next media rights contract was signed off.

“I think David Malone (V8 Supercars chief executive) has got a truckload of media experience being the former head of Fox Sports,” Cochrane said.

“He has been heading that up now for quite some time. I’ve been advising on the sideline and I’ll continue to do that. So really the media deal didn’t really come into my equation. I didn’t want to do it at the end of a season and everybody grapple with it. So how do you
pick these things time and I really don’t know.

“When you consider a couple of scribes wrote that I wouldn’t last three months I think my tenure has been quite long.”

CLICK HERE to listen to the full interview on V8 Insiders podcast.