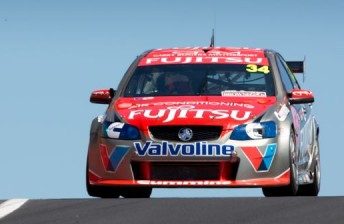 Michael Caruso across the top of the hill

Michael Caruso has upstaged the pre-race favourites by topping first practice for the Supercheap Auto Bathurst 1000 in his Fujitsu Racing Holden.

Caruso set the fastest two times of the session on his final two flying laps, leaving the benchmark at 2:08.41s.

Jamie Whincup had earlier been the first to break into the 2:08s halfway through the 50 minutes of running. His time stood as the fastest for almost 20 minutes until Caruso’s late run.

Shane van Gisbergen, Steve Owen and Mark Winterbottom filled third through fifth in their Fords, while Greg Murphy was sixth despite reporting a serious imbalance in the handling of his Kelly Racing Holden.

Garth Tander, Will Davison, Michael Patrizi and David Reynolds rounded out the top 10 in a session that ran green for its duration.

As expected, the primary drivers did the bulk of the initial running in each car.

Nine co-drivers did take to the circuit in the closing stages, including Steven Richards in car #5 and Warren Luff in car #888.

Frenchman Alexandre Premat, one of five rookies in the field, improved steadily during his session-high 18 laps to end up 24th.

The V8 Supercars will return to the circuit at 1255 local time for a 45 minute, co-drivers only, second practice.