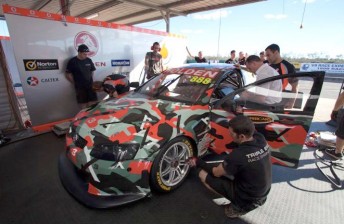 Triple Eight Race Engineering will put its second Car of the Future V8 Supercar chassis on track early next month.

Having become the first team to test a COTF on August 6, the Holden outfit has selected November 8 (the Thursday following the Abu Dhabi event) for its second ‘manufacturer day’, where it will roll-out the second of its new-generation cars.

The test will take place at Queensland Raceway, with the team electing against taking advantage of the testing regulations that allow one of the two manufacturer days to take place outside of a team’s home track.

“There were opportunities to run at Eastern Creek (with FPR on October 15) or Phillip Island (November 22, potentially with the HRT), but logistically they don’t really fit the calendar very well,” TeamVodafone team manager Adrian Burgess explained to Speedcafe.com.

“The benefit of going to a faster circuit is obvious, but with the (new Commodore model) VF yet to be released, it means we need to keep running with the current aero package.

“We’re happy to go back to QR as it’s a place where we’ve got a fantastic baseline, so we can carry on the job of putting miles on parts and running through set-up options and so on.”

Burgess added that the team has yet to decide on when it will give its second chassis the 20 lap shakedown that is allocated to each new car. The most likely scenario appears to be a run at Queensland Raceway the day prior to the test.

Triple Eight will complete further gearbox cooling system evaluations on November 8 as the category continues to work on the installation issues surrounding the new transaxle gearboxes.

According to Burgess, Triple Eight will also offer Stone Brothers Racing the latest version of its coolers for when its first car (to be run as a Ford Falcon) hits the track in the coming weeks.

“As a category, we need to be collectively putting some solutions out there for the best end result for the category,” said Burgess of the situation, which has already seen Triple Eight, FPR and HRT run their own cooler designs during their first tests without fully solving the problem.

“We want 28 reliable cars on the track in Adelaide next year. Having 14 cars running and the other 14 in the garage with problems won’t be good for anyone, so we’re more than happy to help out with these sorts of issues.”

Meanwhile, Burgess confirmed that the team’s first chassis will form one of the four TeamVodafone COTF Holdens that the team expects to have in its armory by the time the 2013 season gets underway with the Clipsal 500 in Adelaide.