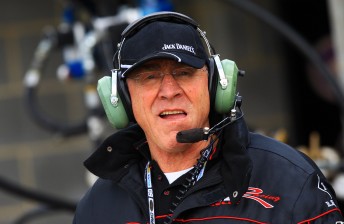 The sale process of Larry Perkins’ Racing Entitlements Contracts is underway and is set to be finalised in the near future.

Perkins notified the V8 Supercars board last week that he intends to sell the two RECs.

The six-times Bathurst 1000 winner’s RECs are currently used by Kelly Racing to run the Holdens it prepares for Greg Murphy and Karl Reindler.

The Kelly team, which will transform to Nissan Motorsport next year, has the first and last rights on the purchase on the RECs.

According to Perkins, confirmation of the sale to Kellys is expected within “three weeks”.

“I can confirm that the process that you go through with V8 Supercars, which is three weeks long, is underway,” Perkins told Speedcafe.com.

“I can also confirm that Kellys and I will be making comments on it at the time when it is finalised.

“To say it’s a done deal is premature, but the expectation is that’s the way it will go.”

CLICK HERE for more with Larry Perkins in this week’s Cafe Chat, where the six-time Bathurst winner discusses the upcoming sale and his thoughts on the Car of the Future.