MotoGP and World Superbike brought under one banner

MotoGP and World Superbike brought under one banner 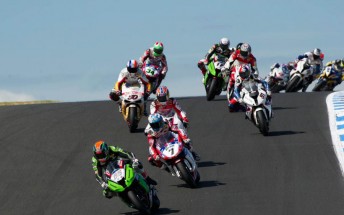 The two premier world road racing motorcycling Championships – MotoGP and the World Superbike Championship – will be managed under a single banner by Dorna from next season.

Dorna – headed by Carmelo Ezpeleta – has been the long time commercial rights holder for the MotoGP World Championships – including Moto2, Moto3 and the Red Bull Rookies Cup, whilst the WSBK Series has been managed by Infront Sports & Media.

European private equity firm, Bridgepoint, announced the two Championships would be a under single management banner. Bridgepoint acquired majority shares in Dorna in 2006 and invested in Infront Sports & Media 12 months ago.

Both Championships utilise 1000cc motors in their major Championships (MotoGP and the World Superbike Championship), however MotoGP is built around purpose built prototype-based racing, whilst WSBK utilises production-based motorcycles. Bridgepoint has committed that both Championships will remain this focus and their separate calendars. The FIM has stated it will sit down with the new umbrella organisation soon to discuss the machinations of the new group moving forward.

Both Ezpeleta and Infront’s President and CEO, Phillippe Blatter welcomed the move.

“We’re very excited to have the two top motorcycle road racing series under one roof,” said Ezpeleta. “We fully expect to develop and strengthen the distinct nature of both MotoGP and WorldSBK as separate properties and remain committed to working with teams and manufacturers, circuit owners, sponsors and broadcasters to give fans the best experience yet.”

“The two leading motorcycle road racing events are now set for sustainable further growth and development,” added Blatter. “A true win-win situation has been created. Both Dorna and Infront can now further strengthen and focus on their core competencies and, in addition, achieve leading positions in their specific area of expertise.”

With 500 staff within its company, Infront Sports & Media delivers over 3000 event days per annum and holds a number of rights under its banner including winter and summer sports, cycling and soccer.

The World Superbike Championship comes to a conclusion this weekend at Magny Cours in France, whilst the next MotoGP World Championship event will be next weekend – October 12-14 in Japan.