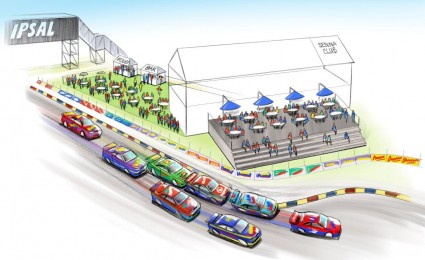 Illustration of the revised Senna platform at the turn 1 chicane

The showpiece Clipsal 500 dates have been announced with Adelaide’s award-winning motorsport weekend running from February 28 until March 3 next year.

Australia’s hugely popular motor racing event has been running since 1999 and will take on even more impetus in 2013 as it will signify the debut meeting for the Car Of The Future specifications.

It will be the first competitive meeting for the new Nissan and AMG (Mercedes-Benz) which will join incumbents Holden and Ford on the grid for the most comprehensive overall of the touring car series since it moved away from Group A and went solely with the big two Australian car makers in 1993.

Adelaide organisers have also announced revamped viewing options for fans with a number of what are called ‘al fresco’ facilities combining dedicated food and beverage outlets, TV monitors, bleacher seating arrangements and cafe areas to be added to the precinct.

“You simply can’t overstate the importance of the 2013 event and the fact that Adelaide and South Australia has been selected to host the launch of this landmark progression in the sport,” Clipsal 500 chief executive Mark Warren commented.

Warren claims the 2013 edition of the Adelaide street race is by far and away the most significant in the history of the race in the South Australian capital, notwithstanding the monumentally successful maiden year in 1999.

“Our event next year as Round 1 of the 2013 Championship will be among the most significant ever in the long history of Australian motorsport with the introduction of the new breed of Car Of The Future specification,” Warren said.

Among the revamped facilities at the event are the infamous turn 8 (Wakefield Road/DeQuetteville Terrace) where the traditional grandstand-style seating will be replaced and the turn one Senna chicane.

The move comes in response to direct customer feedback and extensive post-event research where fans have expressed a desire to enjoy the race live in a casual and more flexible area.

Patrons will be able to sit in bleachers, move to cafe umbrella covered tables and have access to food and beverage outlets.

Warren said his organisation has also made a decision to offer for the first time a 20 per cent student discount on all trackside tickets and in the section L of the pit straight stand.