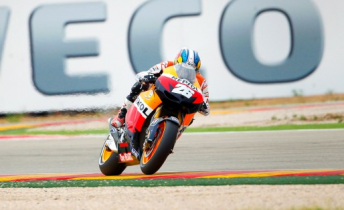 The local Spaniard rider was beaten into the first turn by Lorenzo, but Pedrosa found a way past on Lap 4 and built an unassailable lead.

The result marked Pedrosa’s third win in the past four races and his fourth for the year.

San Carlo Honda Gresini’s Álvaro Bautista was sixth ahead of the ever-improving Jonathon Rea, who was able to continue after a minor collision with Ducati’s Valentino Rossi. Rossi took seventh ahead of Karel Abraham and Aleix Espargaro.

Rossi’s team-mate Nicky Hayden endured a violent crash after colliding with a wall at Turn 16. The American was flung off his Ducati and pitched over the safety barrier. He received instant medical attention and was later declared in good health by medical centre staff, yet has been given a neck brace and will undergo more precautionary checks.

The next round of MotoGP will be held at Motegi.